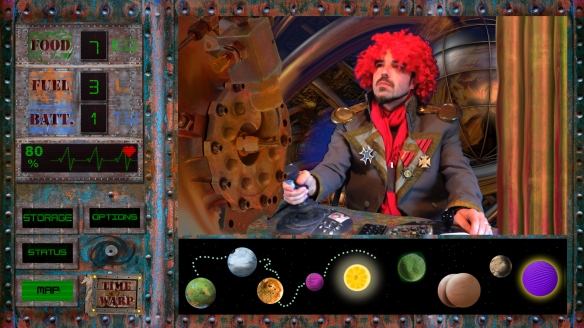 General Horse and the Package of Doom is a game coming soon to Steam that I am super excited for. I am seriously expecting myself to be talking about this game for months among friends and colleagues, if it delivers on the promises the developers are making in this insane trailer.

The trailer above is bizarre, featuring amateur filmmakers being as ridiculous and over the top as they can, and making a FMV videogame out of it. I love it. General Horse is a game that I swear has been designed for me, as someone who has spent countless evenings rewatching awesome B-movies from the 80s and 90s. Six String Samurai is literally one of my favorite movies of all time, and I swear that Package of Doom references that film in the trailer about halfway through.

For the record, this game does have some street cred, as developer Studio Spektar has previously worked on the excellent Viktor a Steampunk Adventure. General Horse will work a bit different than a traditional point and click though; the game will be similar to something like Oregon Trail where we’re choosing routes on a map, which will affect which planets we go to? So while there will be dialog choices, there will also be game over scenarios. Hopefully the game will be plenty replayable with easily skipped cutscenes and a decent amount of accessibility options.

General Horse and the Package of Doom will be out June 23 on Steam to purchase.

Want to tell Sam about YOUR indie game? Shout out on Twitter!

This site uses Akismet to reduce spam. Learn how your comment data is processed.